Is Your Company Disconnected from the Medical Device Regulations It Must Abide By? 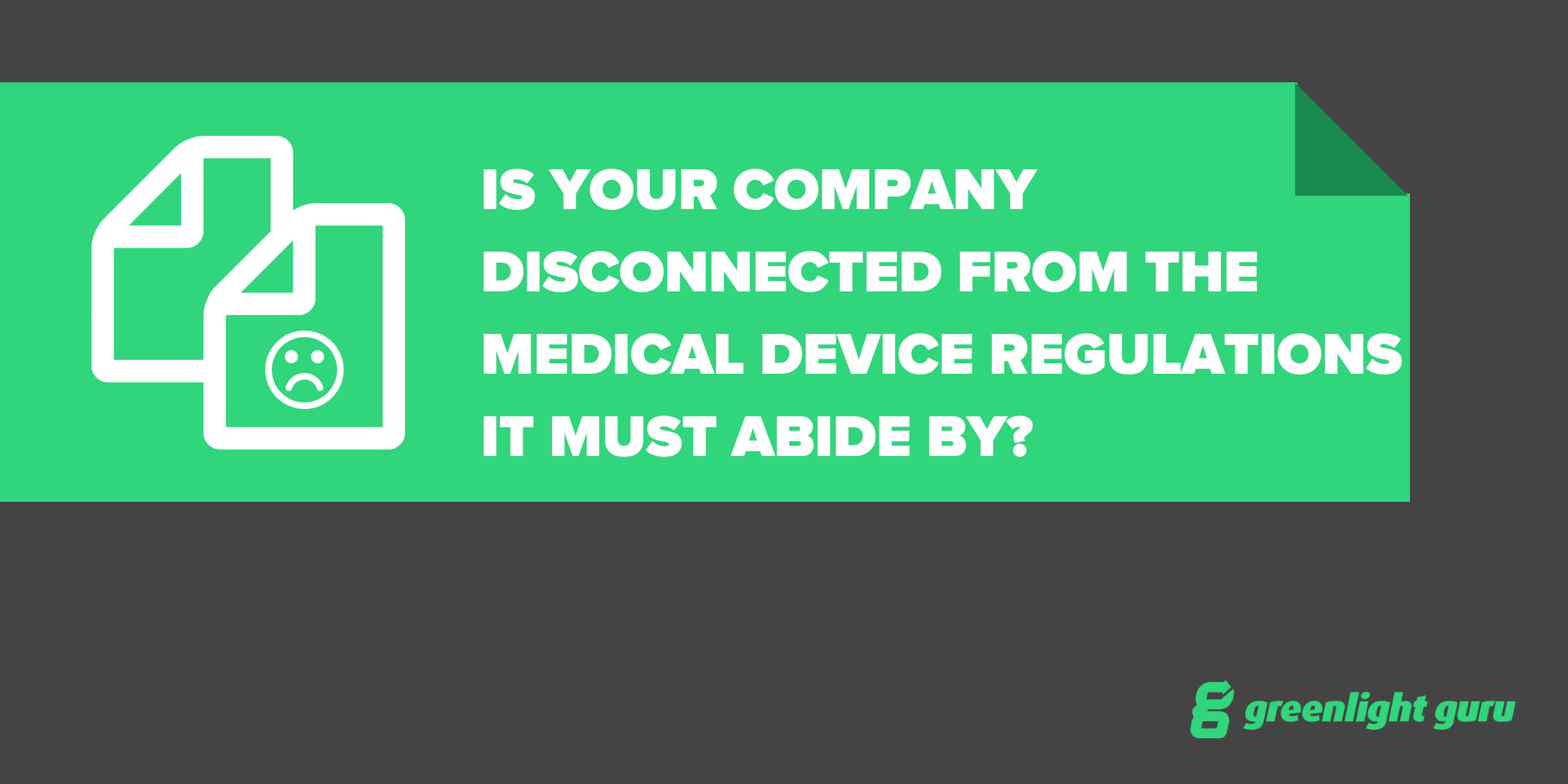 As I type this post, I must admit that I’m a little perplexed.

Disconnected from the expected behaviors that a medical device company must exhibit.

Looking back throughout my consultancy and even throughout my career, nearly every medical device company I’ve worked with seems to have at least a few disconnects.As I think more about it, I wonder why I am perplexed.

And then I go back to being perplexed.

The expected behaviors, rules, and regulations established are intended to ensure the medical devices being sold and used on patients are safe and effective.

So what are some of the ways a medical device company is disconnected?

Let me share a short story about one recent client which started about two years ago.

When we first met, the company had established itself as a significant distributor of medical devices and healthcare products within a particular product segment.

During the first meeting the CEO of the distributor communicated to me that he makes a pretty decent margin on several of the products he sells and distributes but thought there would be a better margin if he designed, developed, manufactured, and sold his brand of medical devices.

So he decided to flip the switch, and we embarked on to developing a few “me too” medical devices that are class II requiring FDA 510(k) market clearance before going to market.

As development progressed, we communicated the need to begin establishing a quality management system to comply with FDA regulations.

The CEO did some head nodding, but I knew he didn’t understand what I was saying. Maybe I wasn’t clear. Maybe he didn’t want to hear.

I thought that maybe the message would start to sink in, especially after being repeated several more times in several different ways during the next year or so.

But it became clear to me that this new company may not get the point during a discussion about medical device complaints.

I communicated the minimum information required when documenting complaints:

The CEO said, “We don’t need to do that now. None of the medical device companies we sell for require that we provide this information.”

He doesn’t get it.

A few months ago, we terminated a relationship with a medical device client because they just flat out refused to abide by and implement processes to comply with FDA quality system regulations.

Funny thing is, the president of the company initially reached out to us because she was concerned that her company had FDA compliance issues.

The company has been in business for decades. They claim to have never been subject to a FDA inspection.

Which I have to believe, because they are still in business.

Our engagement was small at first, starting with a gap analysis against the QSRs. We quickly identified some significant compliance issues and identified a list of priorities to start getting the medical device company on the right track.

After a couple of “successes,” I was optimistic that the company would be able to put procedures in place to align with medical device company expectations and requirements.

But then we discovered a HUGE gap in the company’s thinking on the topic of product servicing, repairs, and complaint handling.

Well, so they said.

We immediately informed the company of the definition of a medical device complaint and highlighted 100s of examples on their log that were most definitely complaints.

Finally, it seemed like the company was getting a clue. This was short-lived. Without constant monitoring and badgering, the complaints were not being documented.

We had more than a few serious discussions with the president.

There were more issues than just the complaint topic. Basically, the company was flat out refusing to abide by regulations required for a medical device company.

We communicated the concerns, the likelihood of a warning letter from FDA (if they were to ever show up), and the impact on her business. Didn’t matter.

We finally communicated that she should NOT be a medical device company and should instead become a distributor.

She had an option to off-load the regulatory responsibilities for the product line to an established, reputable contract manufacturer. And she said she wanted to become a distributor.

Except she wanted it both ways. She wanted the luxury of the lax requirements for a medical device distributor AND to put her company brand and name on the products. This would make her a relabeler and subject to the FDA quality system regulations she refused to follow.

She was NEVER going to get it, so we fired her as a customer.

DISCONNECT #3: Documentation Will Be Caught Up After Launching the Medical Device Into the Market

Another client was moving fast and furious to launch a few new medical devices into the market.

The products are pretty simple and straight-forward and happen to be FDA class I devices. And with no formal FDA submission or clearance required, these products would be able to go much faster than class II counterparts.

But the products were electronic devices with embedded firmware. So there was a fair amount of testing required. And a lot of components.

Plus, the company is not only establishing new product designs and manufacturing processes, many of the project team members were going through medical device product development for the very first time.

And the team did an okay job of keeping up on this in the first few months. Then the CEO decided to bring in some new manufacturing equipment (primarily for future projects yet to start) and teach his team new skills and get them invaluable experience.

Back and forth with electrical safety testing, which is very common too. The end of the year deadline was quickly approaching. Yet there was a large pile of things left to do.

It didn’t help that one of the key manufacturing sources was dropping the ball. This meant internal project team resources had to pick up the slack to establish manufacturing processes.

As time ticked, the new products for the medical device company progressed closer and closer to a release. However, the supporting documentation was not kept up at the same pace.

The team accepted that they would not be able to get all the documentation done in time.

But the product would be ready. Really?

The CEO and project team members quickly adopted the mantra that the documentation would be addressed later, after launch.

This seldom happens and is a mistake.

Never mind the fact that the company is ISO 13485 certified and is NOT following established company procedures.

So, what do you think.. Could your company be suffering from a little disconnect (or possibly just confused)? If so, it's not the end of the world, but you should do something about it. Soon.

Feel free to shoot me an email and we'll see how I might be able to help.