By Jon Speer, April 30, 2018 , in 483 Observations / Warning Letters and Regulatory Compliance and ISO Audit and Nonconformance Management and FDA Inspection 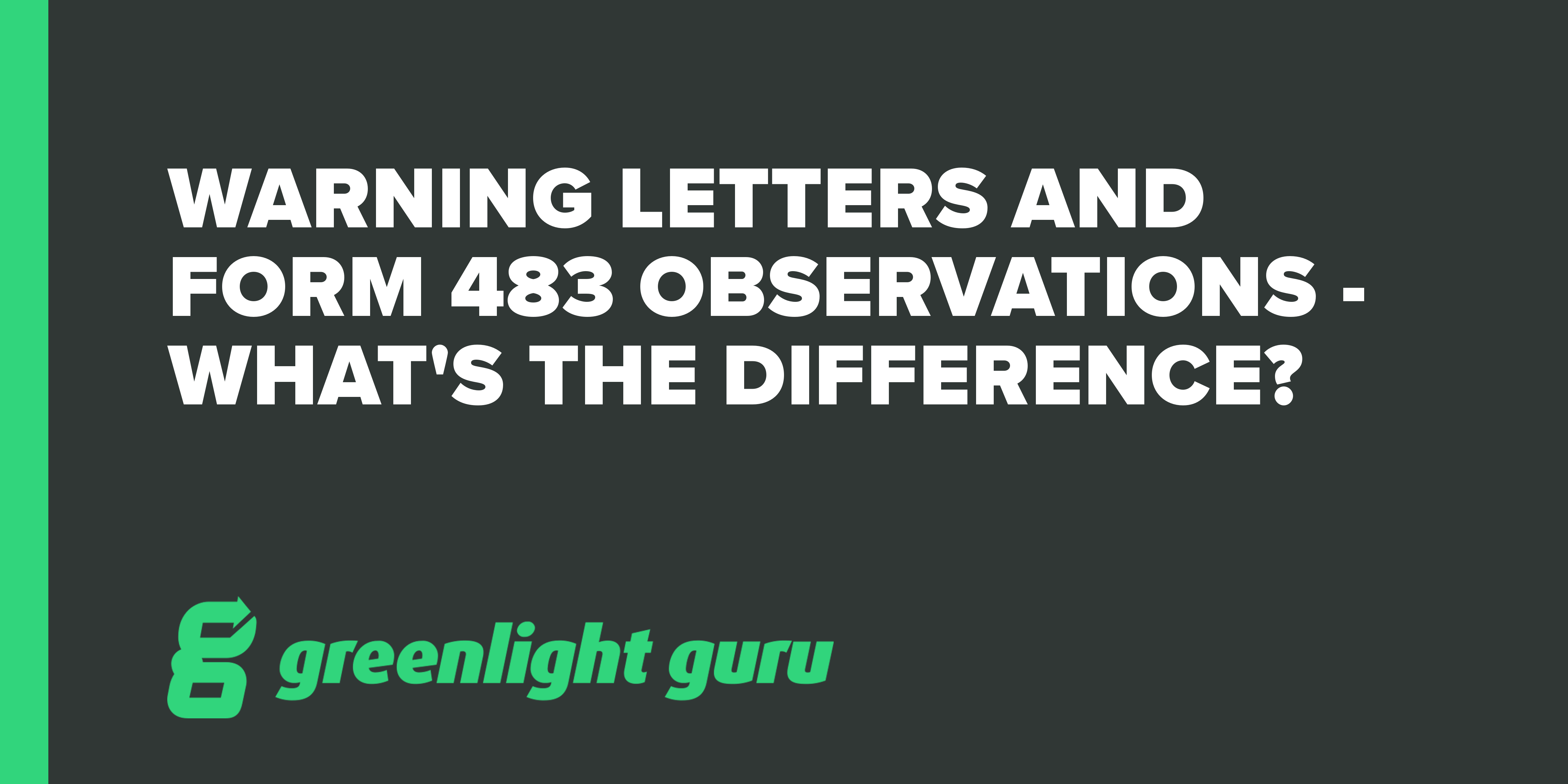 If you’re a medical device company manufacturing Class II or Class III devices, you can expect to have the FDA turning up for an inspection.

It’s what happens after that inspection that we’re concerned with in this article.

Some of you will receive 483 observations, unfortunately, some will also receive FDA warning letters. It’s important that you understand the difference and know what will be expected of you in either case.

How do these work? Let’s take a look:

Free On-Demand Webinar: How to Avoid and Respond to FDA 483's and Warning Letters

Honestly, it’s fairly easy to become a medical device company in the US. There is little that you have to prove or demonstrate as long as you can classify your products correctly. There aren’t a lot of hoops to jump through, that is, until you get to the clearance process for the product.

The FDA bases its treatment of the product on the classification. This is the pathway to get clearance, for example using 510(k) submissions for Class II products. Things like 483 observations happen when the FDA gets to the point of an inspection. There are a lot of different branches and offices in the FDA and the people who evaluate 510(k) and product submissions are the ODE (Office of Device Evaluation), while a different group does the inspections of facilities. Field investigators are part of the Office of Compliance within the the FDA.

Class II and III device companies are subject to FDA inspections, mandated every two years. When the inspection happens, the investigator will give you a form 482 (notice of inspection), then during the course of the inspection, if there are any significant issues or noncompliances observed, they will be documented on form 483. This form will identify the issue that you need to address.

The FDA works on an escalation process. If you’re in receipt of a 483, it’s time to sit up, pay attention and take it very seriously. This is the opportunity to correct the issue early. A 483 observation doesn’t automatically mean you’ll also get an FDA warning letter, but there’s a good chance you will if you don’t heed the 483. There is another branch of the FDA that decides whether or not you receive a warning letter.

We created a definitive guide to responding to 483 observations here. It’s important that you understand what is expected of you and what your next steps might be.

Before an inspector leaves your facility, you’ll receive a draft of their report (known as an Establishment Inspection Report, or EIR) as well as drafts of any 483 observations. They’ll ask you whether you plan to address those observations too. It’s a wise choice to decide to address them. I’ve seen companies who have said they won’t be taking action on the observation and they, almost inevitably, end up with a warning letter. Remember, the FDA isn’t messing around, consider that 483 observation to be fair warning that something isn’t quite right.

483s are not public and some people don’t take them as seriously as a result. My advice is that you should be taking these very seriously. You’re now on the FDA’s radar screen if you’ve been issued any 483s, so it’s a big deal to take the appropriate action within the proper time and avoid them being escalated.

Escalation can involve a number of things, including those warning letters. I’ve even heard of a new one recently - companies being summoned to their FDA field office, basically like “reporting to the principal.” This is especially true if the FDA doesn’t feel that the company is sensing the gravity of the situation with 483 observations. You might find yourself sitting in front of someone who can have a lot of influence over whether your company can continue operating, having to explain to them what you’re doing about the situation.

After your inspection, the draft EIR report gets sent to the branch office where a decision is made as to whether the company should be issued a warning letter.

A warning letter is an escalation. This is a serious thing to get into. Warning letters have mandatory requirements placed on the medical device company and they are made public - anyone can search online and find that the company has been issued a letter. I’ve even heard of competitors using a company’s warning letter as a negative example of why a potential customer should choose their own company over the competing one.

Usually for each item, they’ll be ordered in priority as determined by the investigator, but if you were to get a warning letter for the same 483 observation after your inspection, the order might be different. If they’re for the same items, they might not be in the same order. It can take some careful managing to ensure you are getting done what the FDA expects of you.

ISO is a little bit different in that they assess the severity of the situation (termed as a “non-conformance”) and assign a “major or minor” value to it. Each registrar has a slightly different process, but the expectation is that you’ll communicate your corrective action plan within a set period of time. This period of time varies depending on whether the finding was minor or major.

As you conduct and complete the minor actions, these will usually be verified by the ISO auditor at your next audit, generally within the next year. Anything major will need to be verified much sooner, possibly by a second audit onsite, or with a remote audit.

Major findings at an ISO audit could put your ISO certification at risk, as could persistently ignoring those minor observations. It’s worth noting that one of the possible definitions falling under “major non-conformance” is “repeated nonconformities from previous audits.”

There are some terminology differences between ISO and the FDA, for example, the term “observation” (which the FDA uses in place of non-conformance). For ISO audits, in addition to a nonconformity, an observation may be raised. An observation is an isolated or non-systemic finding detected during an audit that does not require action to bring the system or any clause into compliance. It may also highlight a potential nonconformity. An observation may also be a positive comment that informs you of some of the strengths of your system. On the other hand, an observation from the FDA will always be something you need to improve or fix!

Free On-Demand Webinar: How to Avoid and Respond to FDA 483's and Warning Letters

In any of these cases, whether you’re getting a 483 observation or warning letter from the FDA, or if you’ve got minor or major non-conformances from an ISO audit, you need to be sitting up and paying attention.

Any of these things can have serious implications for the ability for your company to continue producing and marketing your products. Besides that, it’s just common sense that you should be listening to what regulatory bodies require for the production of safe and effective devices.

I hope you don’t have to deal with any of these, but there will always be some. Take them seriously, know what is expected of you and work to get them cleared up as efficiently as possible.