5 Places Paper Might Be Hiding in Your Medical Device Company 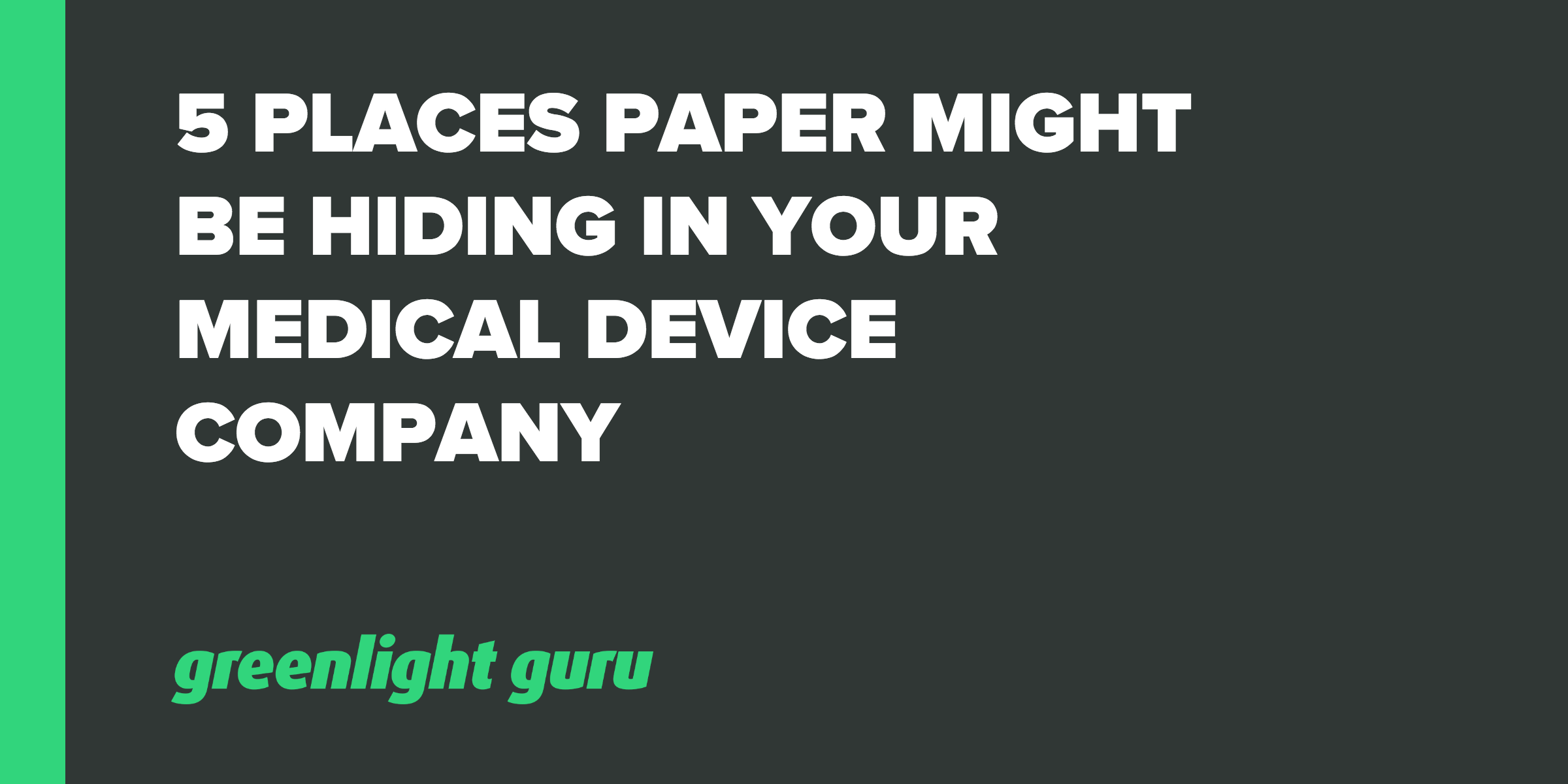 A few weeks ago you left a big pile of paperwork (also known as your Document Change Order (DCO/ECO) in the hands of the master of the universe (also known as your document control specialist).  You’ve gone to check with them about the status of the DCO and you’ve just heard that they processed it and started routing it for signatures sometime last week.

Too bad for you, your company has a paper-based quality system and you literally have no idea where those documents could be hiding.

You need to get those documents released by tomorrow? Looks like It’s time to go on a scavenger hunt!

Here are 5 of the most common places those documents could be hiding:

Where’s the first place you should go look for your DCO?

Your manager’s desk, of course!

Managers seem to be always be in meetings, so you can’t simply ask her if she has it – or even if she’s seen it. Time to head over to her office and play I spy.

I spy with my little eye something that is…red!

As soon as you walk in her office you see a red folder on her desk. You get all excited (and relieved) thinking that you’ve managed to find it quickly.

Womp, womp, womp...It’s a DCO alright, just not the one you’re looking for.

You know operations is always putting out fires…maybe they got busy and overlooked your DCO.

So you head over to where operations is located.

You’re in luck! The stars aligned and the operations approver is at his desk! Maybe he knows where it is!

After asking him if he’s seen it (He has!!) and whether or not he approved it (Score! He did!), you find out that he gave it to a manufacturing engineer to give to the quality engineer to review.

Time to track down the quality engineer…

Okay the good news is that you found the quality engineer who supposedly had your DCO.

The bad news? She doesn’t remember seeing it, let alone signing it.

Now you’re backtracking to find the manufacturing engineer who had it last. Hopefully they can shed some light on where it went.

Turns out that quality engineer you spoke to earlier did get the DCO from the manufacturing engineer.

They just didn’t realize that it was your DCO. They thought it was the manufacturing engineer’s.

Problem solved! So where did they put it?

Your goal of getting this document released by tomorrow is starting to feel a like a dream.

And actually finding the DCO? That’s beginning to resemble a wild goose chase.

The good news is that you’re running out of obvious places to look for it.

Dragging your feet, you head over to marketing. Or at least you think this is marketing…right now it’s a hectic mess with a trade show booth being set up in the middle of the room.

Next thing you know, you’re being asked to help assemble it (being an engineer and all, you ought to be able to help build something).

After helping them get everything squared away, they all pitch in to help you find it.

With their help, you find several DCOs: one that had been turned into a coloring page, one that had coffee spilled all over, one that might have actually been eaten by the dog, and one that is several months old.

All great finds, but none of them are yours.

Maybe you should have started here first.

This place is amazingly neat and organized.

Everything is so neatly filed away in the correct locations.

You breathe a sigh of relief. Surely someone here knows where your DCO went.

Several people in the accounting department verify that they reviewed and approved all of the associated documents.

And then they go one step further…they tell you that they were the last ones to sign it.

Everyone else had already approved it before it got to finance.

If your company uses a paper based quality management system, you already know how this scavenger hunt ends.

It ends exactly where it began.

At the desk of the master of the universe, your document control specialist.

It turns out that it got buried under a stack of new DCOs that they were reviewing.

Because there was nothing to indicate the status of the DCO, they had no idea it had been approved and lost.

At least you found it in time to have it released by tomorrow.

Too bad you’re going to be going on a very similar hunt the next time you submit a DCO…unless of course you can convince your manager to invest in an electronic quality management system in the meantime.

Jesseca Lyons is a Senior Medical Device Guru at Greenlight Guru and a Mechanical Engineer by trade who loves working with cross functional teams, including both engineering and non-engineering disciplines. She’s spent most of her career gathering and defining requirements for new product design and development in the...

Jon Speer
February 14, 2020
How can I track the effectiveness of my QMS after my medical device goes to market? We'll cover the procedures you need to establish to maintain quality control of your... Read More
Product Development

Etienne Nichols
June 17, 2022
Stepping into the role of project manager at a medical device company is a unique and exciting experience. It’s also a challenge, but if you’ve decided to take on this role,... Read More