Does Your Medical Device Startup Suffer from CEO Disconnect Syndrome?

By Jon Speer, September 10, 2015 , in Design Controls and True Quality and MedTech Business 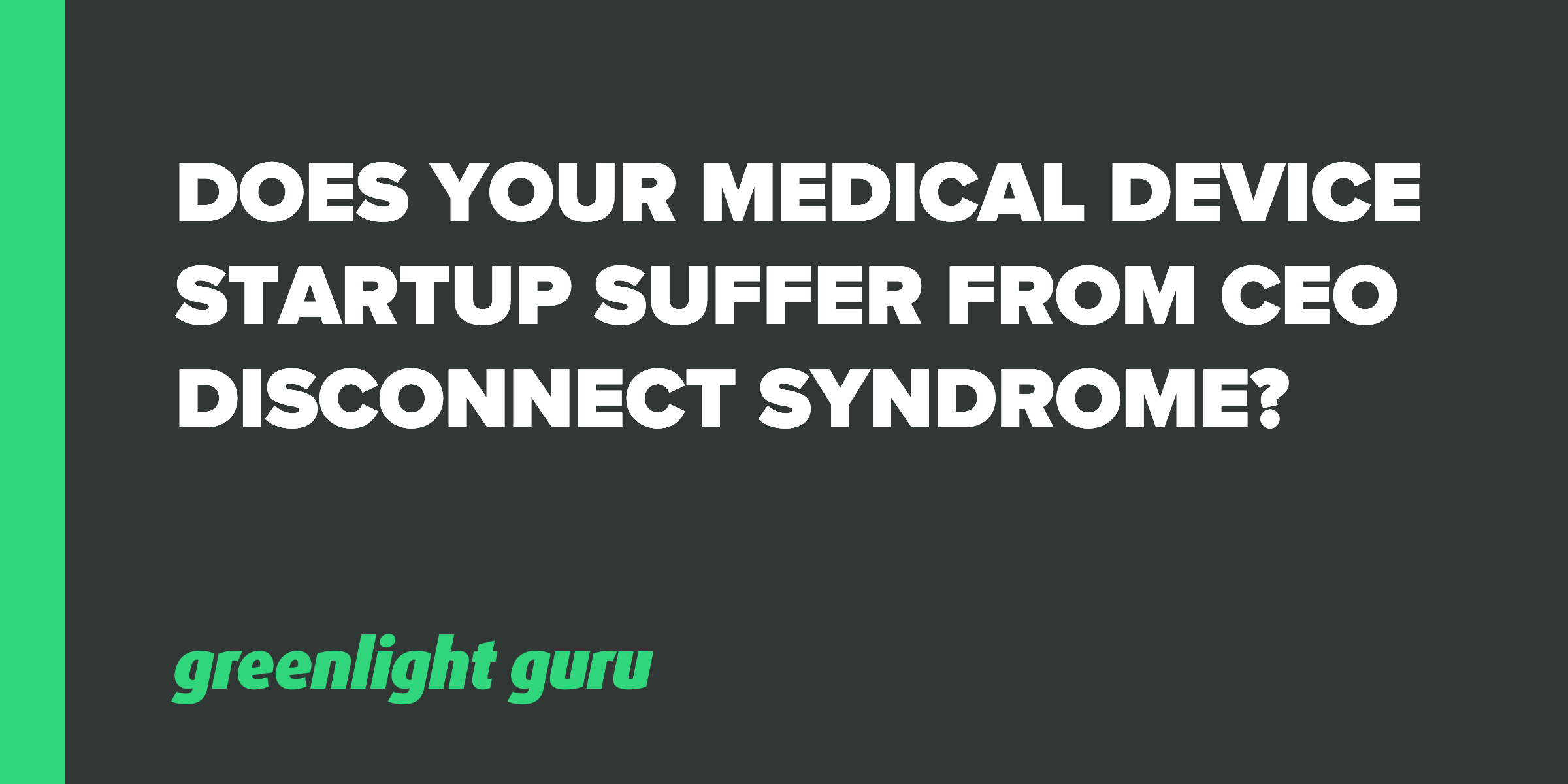 One where a CEO of a medical device startup does not seem to appreciate the time, effort, and energy his team is about to spend documenting Design Controls, Risk Management, and a Quality Management System.While the names have been changed, these events are true . . .

My story begins a couple months ago. I was contacted by a medical device startup engineer, Phil.

You see, Phil had read The Ultimate Guide to Design Controls and was intrigued by the Greenlight Guru software solution.

Phil had worked for big companies before. He witnessed the ridiculousness firsthand. Standard, legacy software “solutions” attempting to solve issues they were not designed for.

Phil knew these battleship EQMS software solutions were expensive to implement and were often used as a dump station for all sorts of documents and records. With inefficiencies that seemed to be built in by design.

Trying To Fix The Problem

But Phil was now with a medical device startup. And he knew that his new company needed two things:

Phil shared that his company had already submitted a 510(k) to FDA, in hopes of getting market clearance.

And he confessed that his company had done something no medical device startup should ever do: they had ignored Design Controls.

Yep, that’s right. This startup company was on the brink of getting the go ahead from FDA to manufacture and sell medical devices.

But by ignoring Design Controls, this company was willing to start their fragile beginnings in a state of non-compliance.

It took real guts for Phil to share this fact about his medical device startup.

Phil also admitted that the company had done nothing to establish a Quality Management System.

And while his big company experience told him there had to be a better way than using legacy systems, Phil knew and understood the necessity for Design Controls and a QMS.

My conversation with him was good. Phil knows his stuff.

It was clear that the pain Phil and his medical device startup were feeling (even if the startup was not entirely aware just yet) aligned very well with Greenlight Guru's solution.

I provided a demo of our platform. Phil was excited. Excited because he could see how we had designed a real software solution for his medical device startup's design control and QMS needs.

Easy to use. Fast to Implement. Exclusively for medical device companies.

Phil knew the road ahead would eventually involve the startup's CEO, Roger.

I got the feeling as the name “Roger” escaped his lips that there would be a challenge.

Phil had a simple plan. The plan was this:

I connected with Sam. Sam got it, within 10 minutes – maybe less. He agreed with Phil. Greenlight Guru was simple to use and elegantly designed for the medical device startup.

Sam shared that CEO Roger had a way and a few ideas of his own. I started to get the impression that Roger was seldom wrong and maybe difficult to work with.

Sam also shared that the company had three employees: Sam, Phil, and Roger.

Part of me thought this is great! Sam and Phil represent 67% of the company. And Sam and Phil love our product.

Sometimes, part of me can be naive. Very much an optimist.

CEO Roger had avoided Design Controls and a QMS, either willingly or out of ignorance. Why would he change his ways?

When I wrapped up my first conversation with Sam, he mentioned that he and Phil had a meeting with Roger in a couple days. They would present the business case since the medical device startup was not in compliance.

Sam and Phil would make the case for implementing Greenlight Guru’s solution.

I caught up with Sam a couple days after the meeting with Roger. I couldn’t see Sam’s face. But his voice was different. A hint of defeat from his words.

Apparently, CEO Roger had an idea. He agreed that something needed to be done for his medical device startup. Roger instructed Sam to cast a wider net. To evaluate other QMS solutions available.

The news was semi-refreshing to hear. I know the other solutions out there. I've had plenty of experience dealing with them over my 16+ year career in the medical device industry. I know they are very difficult to use and not designed for medical device processes.

Not to mention, we go up against them all the time, and win.

My advice to Sam was similar to that I give all medical device startup prospects when evaluating other solutions:

A couples weeks later, Sam and I caught up. He told me that he appreciated the advice. These legacy EQMS companies had things to hide. They were not up front about costs. And getting a demonstration scheduled was a nightmare. In fact, he was still waiting to have another software demo.

Apparently Roger inserted his opinion in the mix too. Roger instructed Sam to evaluate Company A. Company A has been around for a long time. Roger felt that was important.

Hearing this made me smile. I knew Company A. I know Company A is not a fit for a medical device startup.

Sam and I reconnected after he finally had the demo with Company A.

Sam’s voice was weak. Defeated. He admitted that Greenlight Guru was the best option he and Phil had seen - by far.

At first, I didn’t understand the defeat. Then...

Sam said Roger preferred Company A because they have been around a long time. That was all that mattered to Roger. Roger wanted to reduce risk for his medical device startup in hopes of being acquired in a few years.

Are you kidding me!?

The single BIGGEST risk for Roger and his medical device startup had been thrown out the window when he ignored Design Controls and establishing a Quality System.

Your Team Is Your Most Valuable Asset

Keep in mind these facts:

I kept my cool with Sam. He was just the messenger.

I was not ready to give up.

I asked Sam for one simple request.

I asked Sam if he could schedule a 30-minute conversation between Roger and Greenlight Guru CEO, David DeRam.

My logic: If Roger truly cares about the future of his medical device startup, he should at least be as informed as possible about the ramifications of the decision he was about to make. Roger should be willing to have one 30-minute conversation CEO to CEO.

A few days later, Sam called me. I knew right away.

It was like Sam had come to pay his condolences. I matched his sorrow.

Sam said Roger had his mind made up and was too busy for a 30-minute call. This medical device startup would be moving forward with Company A.

After the call, you can imagine I was pretty upset.

Actually, I was baffled.

If You Ignore Your Team, You Lose Credibility

How could CEO Roger completely ignore the advice of his team? Especially when Roger’s team will take care of Design Controls and the Quality Management System that he ignored.

However, it’s a story that happens all too often.

Don’t be a Roger.