Case Study: How Flexlogical Is Making Quality A Competitive Advantage By Adopting Data-driven Approach With MDQMS 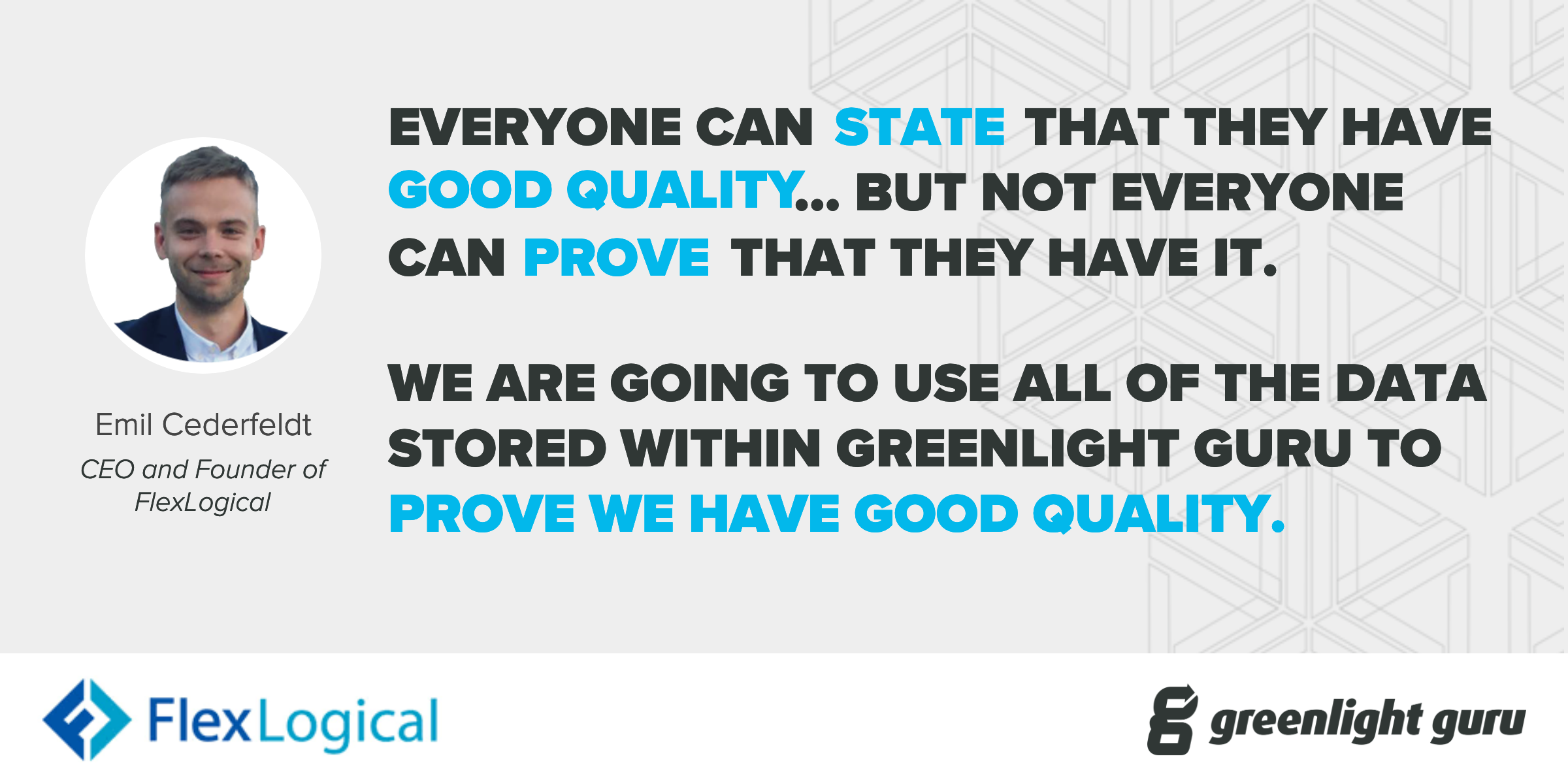 As medical device companies around the globe are continuing to operate among the implications of COVID, many teams may find themselves at odds with the new normal.

One constant that teams everywhere are benefiting from is the ability to work from home - granted their processes and tools allow it. With a readily accessible quality management system (QMS), teams are able to continue moving along their timelines and minimizing the impact of any speed bumps along the way.

FlexLogical has realized just that. By prioritizing quality from the beginning, they have put themselves in a good position by implementing the right QMS. For a team that works diligently to ensure great quality in their device(s), they were intentional from the start about what quality system would fit their needs and set them up for success.

Having a good quality system in place is not just a check-box activity for quality assurance and compliance, rather it promotes a data-driven approach to quality that accelerates time to market and enables growth into new markets without quality becoming the bottleneck for their company - even when at odds with a global pandemic. The FlexLogical team is experiencing just that as they continue to operate and propel their business forward...

Flexlogical: Developing High-quality Devices To Revolutionize The Art Of Surgery

As minimally invasive surgeries are becoming more common with many being carried out by one physician throughout a single day, the need for high-quality, high-performance ergonomic tools is widely apparent. These tools directly impact the surgeon’s comfort, maneuverability, and performance during surgery.

While finishing his engineering education, Emil Cederfeldt, co-founder and CEO of

As an early-stage company, based in Copenhagen, Denmark, the team at FlexLogical takes pride in developing a high-quality series of surgical tools that eliminates these issues and wants to ensure it is translated and demonstrated within an equally high-quality QMS.

In a previous R&D role at a medical device company, Emil had worked with a paper-based quality management system where they also leveraged digital tools, like Excel, to manage their device requirements. This experience proved to be cumbersome, time-consuming, and full of complexity when it came to maintaining traceability and version control.

When he seized the opportunity of starting FlexLogical, Emil had a strong sense of the importance of implementing a digital quality system. As FlexLogical began solidifying their device concepts and adding more team members to focus on risk and developing their QMS, Emil wanted to assure they approached quality the right way.

As part of their commitment to producing high-quality devices, Flexlogical manages hundreds of design inputs for their devices. Emil knew that “using excel would be too comprehensive” for their devices and would not support the integrity and quality of the devices they want to produce - leading to more cumbersome work in the long run.

Based on their collective previous experiences, the team at FlexLogical identified several needs in a QMS software solution to make their team successful in managing quality. The features and capabilities they were looking for include:

Flexlogical Sets Out To Make Quality Management Easy To Do

After assembling an advisory board, Emil began to have conversations with other stakeholders, medical device experts, and consultants to understand what QMS software solutions they would recommend, helping them fulfill their company’s needs.

While searching for a software solution, the team at FlexLogical was focused on finding and establishing a QMS software that would set them up for success from the start. They did not want the QMS to become a bottleneck that slowed them down or stunted business growth.

Simultaneously, as FlexLogical grew their team, they hired a Quality Manager to oversee the system they would ultimately put in place. This person had previous experience with Greenlight Guru’s MDQMS and brought along a recommendation of the software for Emil to consider.

“We were astonished at how easy managing quality could be within Greenlight Guru.”

One of Emil’s major concerns from the beginning with implementing a software solution was the time it would take to implement and learn the system. Following a live demonstration of the software, Greenlight Guru proved to be not only an intuitive system but also one that would also make quality management easy for their team to learn and implement. 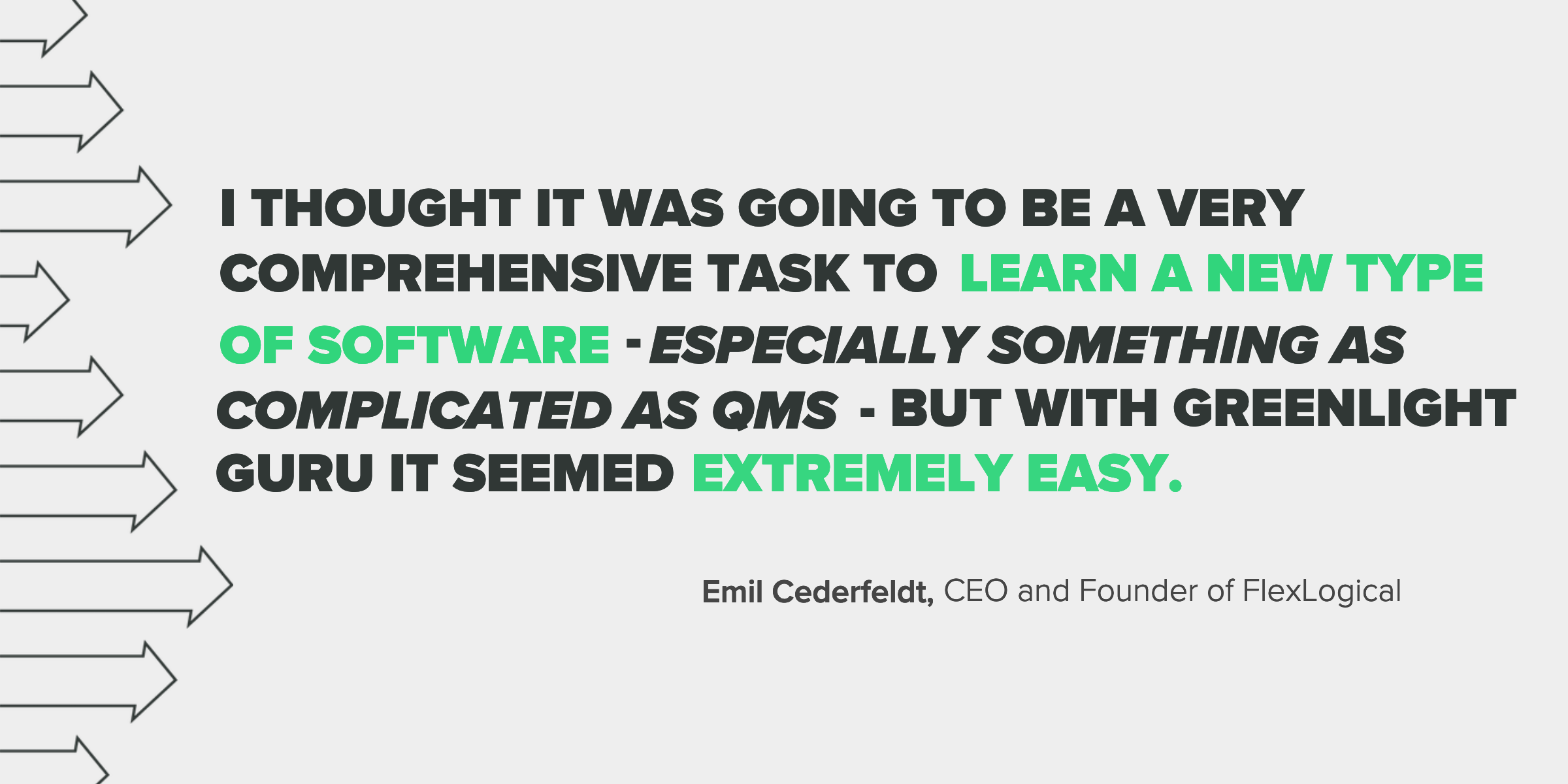 As a newer and younger professional navigating the medical device industry, Emil found immense value in the ability to learn how to manage the quality system just by using it.

Emil was also drawn to how they could document traceability around their design controls and risk management within Greenlight Guru. This helped him ultimately decide that Greenlight Guru’s MDQMS would be the best fit for FlexLogical.

As the team began onboarding and attending the training sessions with Greenlight Guru, they quickly learned just how easy it was to navigate through and use the system.

"Implementing Greenlight Guru went much, much faster than we anticipated..."

Emil attests to the speed and efficacy of implementing an MDQMS - one that proved to be easy to pick up and use. They were fully onboarded and using the system assuredly within just 5 training sessions, surpassing their expectations and timeline for implementing a QMS.

Where they found immediate value was in building out their design control and risk matrices. With their many design inputs, the ability to link together different items helped them build out the traceability needed for their device(s).

Retrospectively, Emil imagines the time and resource strain that would have been felt with linking and building out traceability in Excel - being too comprehensive and time-consuming for their fast-moving team. More importantly, Emil realizes that critical links would have more than likely been missed between design inputs and risk mitigations - a vital component for ensuring the safety, effectiveness, and usability of their device(s).

Streamlining these processes in Greenlight Guru has given Flexlogical clear visibility into their quality system as they can search within the system, and matrices, to easily find the information needed. 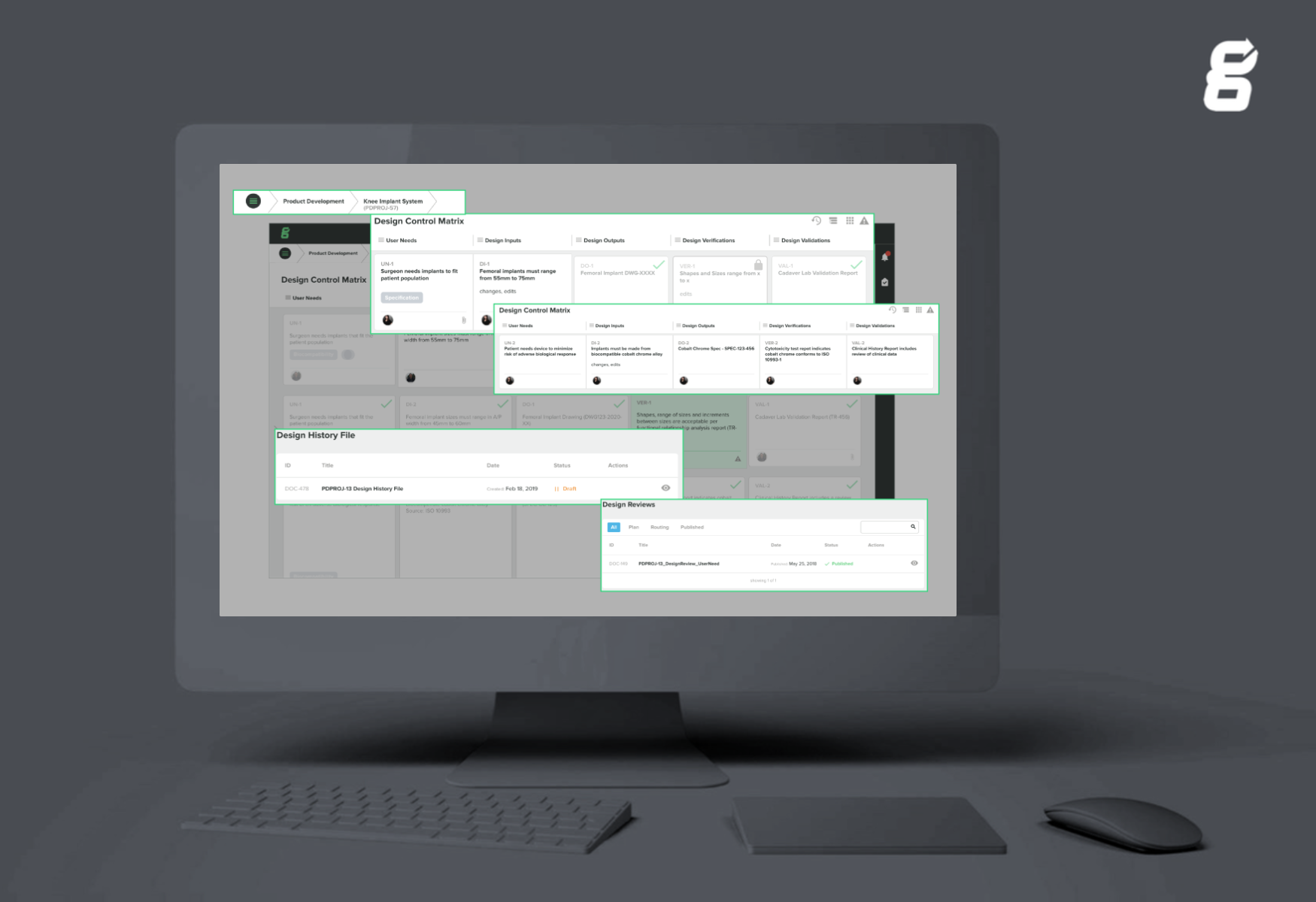 Setting The Foundation For Data-driven Quality With Greenlight Guru

Using Greenlight Guru has presented FlexLogical with many tangible and intangible benefits. From documenting their design control and risk activities to saving time and ensuring market competitiveness, their team has confidence in the quality of their device and quality of their QMS.

With an MDQMS that enables thorough documentation and acts as a single source of truth, all of the information is readily accessible allowing the FlexLogical team to work collaboratively - and effectively. There is no longer repetitive research or re-work being done within their QMS, enhancing their team’s productivity.

This, in turn, has positively impacted their development timeline by saving FlexLogical both time and money, reallocating these resources to other value-add activities. With controllable documentation, Emil can see the most up-to-date version of information, any changes that have been made, and why they took place thus minimizing the need for unnecessary back and forth discussions.

He can attest that the clear view into their QMS has advanced their timeline by saving FlexLogical both time and money, reallocating these resources to other value-add activities.

As CEO, Emil is confident that the processes and documentation within Greenlight Guru support the data-driven quality they need to demonstrate and ensure a competitive advantage in the marketplace. He is also confident that the workflows and interconnectivity of the system will lessen the chances of human error.

What’s Next For Flexlogical: Prepping For Paperless Audits

Emil and his team are continuing to operate business as usual, despite experiencing some minor impacts of COVID-19. Although their testing has been delayed, they are still nearing their design freeze and preparing for their next milestone.

As they plan to enter the local Scandinavian market initially, they are also scoping the expansion into other markets by getting their ISO 13485 certification to comply with EU MDR. While their ability to request a Notified Body has been limited with a major focus on COVID-19, this hasn’t prevented them from diligently assessing the timing and preparing for their Notified Body audit.

Emil recalls preparing for audits in his previous experience, a process that took upwards of 2-3 weeks - several days alone just for the technical file audit. Come time for the audit, they would spend nearly 20% of the time searching for the documentation, and the traceability behind it. This became a frustrating experience for both parties, making it easier for auditors to find existing flaws in your QMS.

Knowing that it only takes mere seconds to display and share documents, records, and traceability within Greenlight Guru, Emil is looking forward to the experience of a paperless audit. He expects that both the preparation and actual audit will require less time and run much smoother.

Recommending Greenlight Guru: Ease Of Use Goes A Long Way

When it comes to sharing words about Greenlight Guru’s MDQMS, Emil recommends the platform based on its ease of use and intuitiveness that makes it worth the investment.

Alongside learning how to use the software itself, the purpose-built nature of the MDQMS has allowed Emil and his team to follow documentation best practices necessary for the development of their devices.

As a first-time CEO in the medical device industry, Emil had been worried about making mistakes that required completing a multitude of change controls. Using the system and following each step at a time, it seems "almost impossible to make mistakes within Greenlight Guru."

Emil is assured that Greenlight Guru is enabling his team to do things right from the beginning and minimize their chances of making mistakes as it relates to documenting activities within their QMS.

Implementing and following the processes within their MDQMS has ensured the necessary data-driven quality and will help the Flexlogical team avoid any speed bumps as they continue to grow and enter new markets down the line.

Nick Tippmann
May 24, 2021
The Guru edge: it's what makes Greenlight Guru so unique and valuable to the medical device companies it serves. Read More