Submitting a 510(k)? First Make Sure You Know What 'Substantial Equivalence' Means 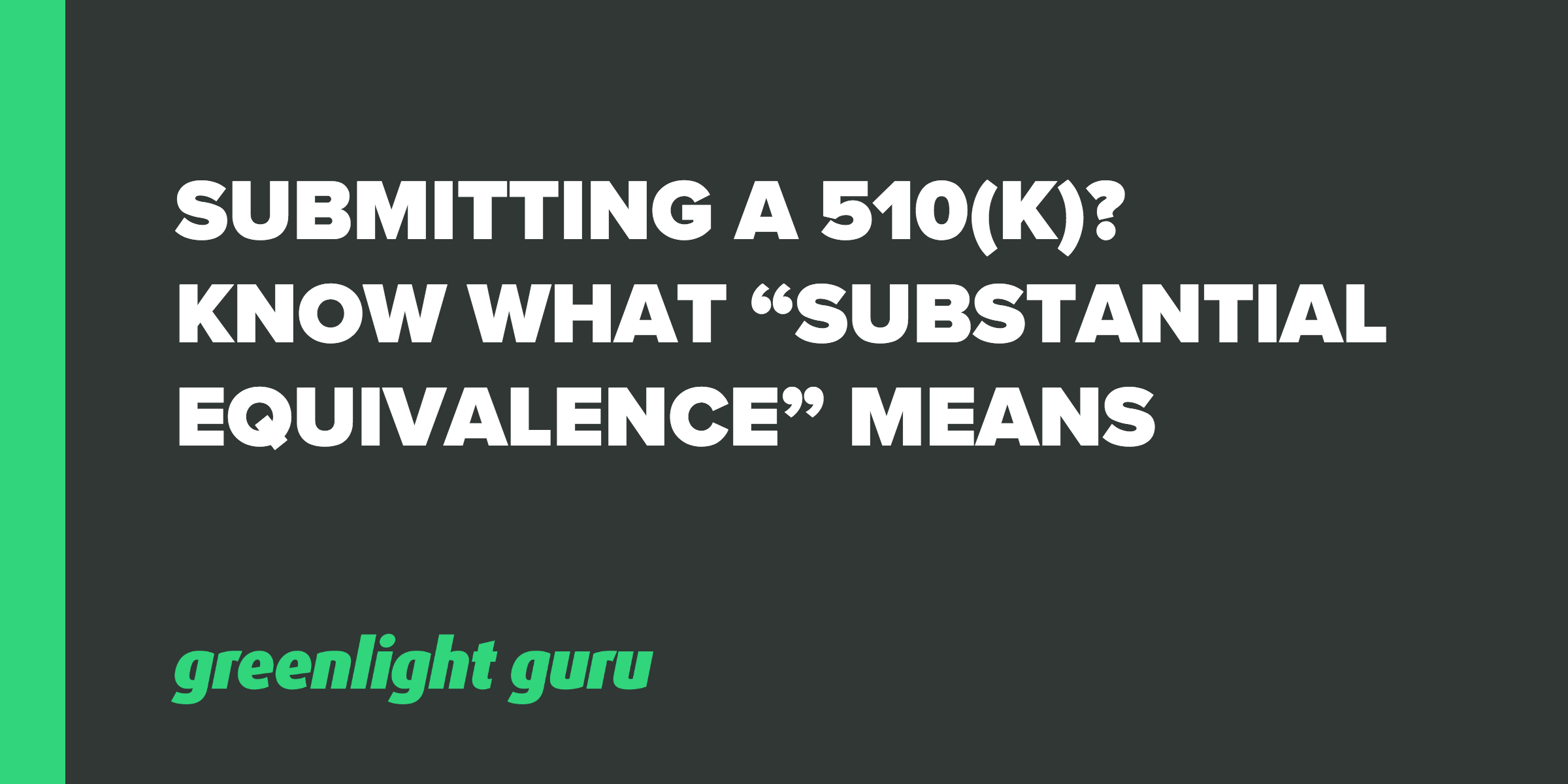 If so, you need to have a thorough understanding of what “substantial equivalence” means, and how it is a requirement of the 510(k) process.

Evidence from the FDA shows that a vast number of submissions that get rejected are tossed back because they don’t meet the requirements for demonstrating substantial equivalence. That’s going to put a dent in any plans you have for getting your product to market quickly and smoothly!

I recently chatted with regular podcast guest, Mike Drues of Vascular Sciences about substantial equivalence, and how it applies to 510(k) submissions. Let’s take a closer look:

FREE RESOURCE: Download your PDF copy of our 5 tips for using a predicate device.

substantial equivalence in a 510(k) submission

The term “substantial equivalence” has been around a number of years, but is still greatly misunderstood.

Substantial equivalence is not nearly as simple as what many people think. Fundamentally, the question we are asking is; how different can two medical devices be, in terms of labeling and technology, and yet still be similar enough to be substantially equivalent from a regulatory perspective?

The FDA has put out a lot of guidances to help answer that, but there’s no solid answer when you’re addressing it. It’s up to you to be able to demonstrate to the FDA of why your substantial equivalence rationale is valid.

One strategy Mike Drues use is to go word by word on labeling of the predicate device and the device being submitted. He uses a technique of color-coding, where he highlights words that are the same in green, similar in yellow, and different in red between the two. He can show visually how the device is substantially equivalent. Anything in red he will work to explain why the difference is not significant with respect to substantial equivalence.

He then does the same on the technology side, highlighting similarities, and explaining any differences. In virtually all cases, he provides a narrative, and he might even include data such as testing.

He cautions that a lot of submissions come in with only data, and no narrative at all. This is not a great approach because telling the story helps to make it a readable document, and helps the reader (which is a FDA reviewer) to interpret from our point of view.

“The data is the data, but we can present that in many different ways.” Mike Drues

It’s important for a couple of reasons;

How to evaluate substantial equivalence

Mike’s approach is all about being in the 25% who get their 510(k) submission accepted the first time. His strategy is to decouple the two key components of substantial equivalence (labeling and technology), and address them separately with matrices.

He takes it even further than this though, by looking at product codes. For example, if the predicate regulatory product code is XYZ, his device will probably be the same. He will work in explanations as to why the new product should be assigned that product code rather than any other. He also talks about other possible devices which might be considered predicates, and explain why he is not using those.

Classification justification is another thing he includes. This might be just a few paragraphs about why Class II is the appropriate class, for example.

The bottom line is that he’s considering all of the possible reasons why the FDA might come back and say that the submission hasn’t demonstrated substantial equivalence. It’s a proactive approach, which looks to demonstrate that he knows what he’s doing.

Stress the similarities, de-emphasize the differences, or try to take attention away from them.

What happens if you make a mistake?

First of all, sometimes the FDA gets it wrong too. Sometimes it just means you haven’t convinced the FDA to buy into your explanation. It is basically “selling” the FDA on your rationale.

What happens if you really get it wrong? Nothing good. You use more time, more money, and sometimes, you’re pushed into a more rigorous regulatory pathway.

From our perspective though, it’s a very amateur mistake for companies to make. If you put the time into creating a good submission, you should have addressed substantial equivalence well early on.

Mike’s approach of including discussion about why he chose not to use certain devices as a predicate is a novel one. FDA regulations state that in order to have a 510(k) we need a predicate. It does not say how close, or how distant that predicate can be, or how recent, or how old. This is all up to us.

With all things being equal, we’d normally choose a predicate that was more recent and close in technology, but there are times when you might not. Sometimes it might be to your advantage to choose something older as your predicate.

Mike would usually include in the pre-submission as well as the 510(k) that he is using the older device as a predicate. He will say something like “you might recall a more recent device which may be used as a predicate, here’s why we’re not using that device.” This is a way to get the FDA up with your way of thinking early in the process.

“If you can’t explain something simply, you don’t understand it well enough.” Albert Einstein

If you were to walk into the FDA to argue that an apple is substantially equivalent to an orange, you might talk about nutritional value, they both grow on trees, they contain vitamins and minerals that are the same. Stress those similarities first!

At step two, we would de-emphasize the differences. They both have a number of shared nutrients, but differences in these and how much of each as well. While there is a difference, both fall within recommended daily nutritional guidelines, so the difference is not important.

Taking that a step further, you might avoid bringing up a difference and wait to see if the FDA brings it up (you don’t have to address it if they don’t bring it up). However, you would still be prepared with an explanation for it if they do ask.

To take another example, if you were to demonstrate substantial equivalence between a truck and a car, we could list a huge number of details that are the same. They transport people, they have steering wheels and chassis, they have engines and consume fuel.

In step two, you’re going to de-emphasize those differences again. You might decide that a pickup truck is a better predicate than an eighteen-wheeler, particularly as a comparison with a passenger car. However, if it were somehow to your advantage, you might choose the eighteen wheeler as the predicate, and explain why a pickup is not the best predicate for your car.

FREE RESOURCE: Download your PDF copy of our 5 tips for using a predicate device.

Remember that substantial equivalence is a crucial part of the 510(k) submission. In order to show it, you need to address labeling and technology. While you don’t have to decouple them, it’s an approach that is thorough and has been shown to work

Fundamentally, stress those similarities and de-emphasize the differences.

Lastly (and very importantly), take all of this to the FDA in advance. You don’t want them seeing it for the first time in your 510(k) submission. It may be kicked back if you’re not successful in convincing them. Use pre-submission, or however else you want to contact them early and make sure everyone is on the same page. This can greatly minimize the chances of problems down the road.

5 Tips for Using a Predicate Device