What is FDA's Approach to Regulating AI/ML in Software as a Medical Device? 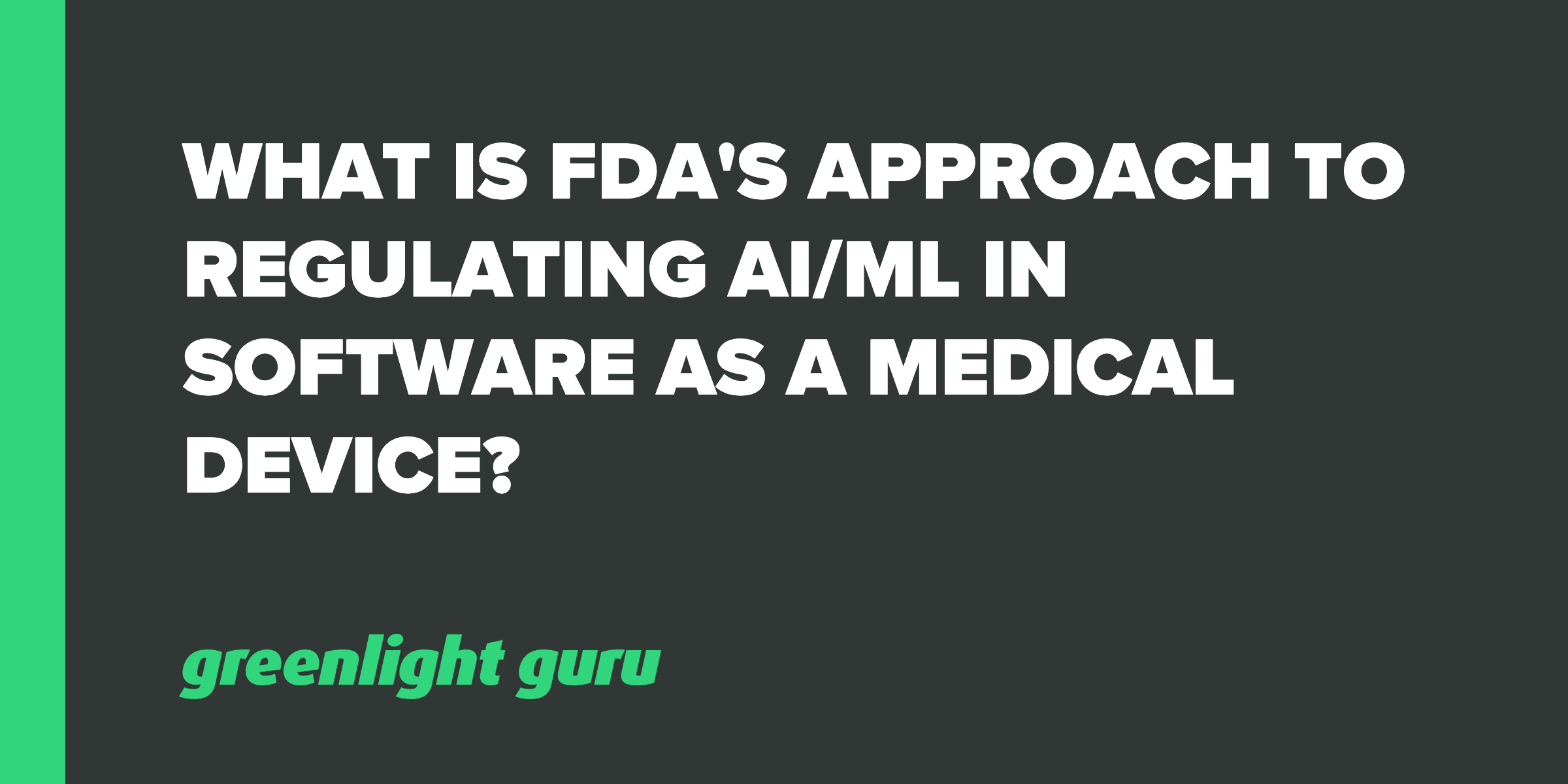 The FDA has released a discussion guideline and request for feedback regarding changes in the certification process for medical device software that uses artificial intelligence and/or machine learning — see proposed regulatory framework here. This blog post explores what this FDA document means to companies who are involved in writing medical device software.

Artificial Intelligence in Software as a Medical Device

First, we should understand what is meant by Artificial Intelligence, or “AI”. This term is used frequently these days, often appearing in discussions of technologies such as autonomous vehicles, virtual assistants, and smartphones. A recent definition quoted in the FDA document defines AI as,

These intelligent programs typically draw upon additional data and algorithms that are external to the fixed instructions and input data and are capable of producing output that is more accurate than what is produced by legacy computer programs.

Machine Learning in Software as a Medical Device

A specific form of artificial intelligence that is of interest for use in Software as a Medical Device (“SaMD”) applications is the use of a generalization engine that can be trained to discriminate different inputs to predict an output. This type of algorithm that learns and improves the quality of output it produces is known as a Machine Learning algorithm.

More specifically, Machine Learning, or “ML”, is an artificial intelligence technique that can be used to design and train software algorithms to learn from and act on data. An algorithm so coded can use accumulated “training” data to dynamically adjust and modify its algorithm so that future calculations and output are more accurate.

For example, a ML algorithm could contain coefficients that affected the weights given to input statistics that affect the final outputs. Static or “locked” algorithms would produce exactly the same output for a given input set, and they are said to be Deterministic.

But a ML algorithm can adjust the coefficients with each run and store them for subsequent runs, and, therefore, its response to a given input set can change over time, producing a Non-Deterministic response.

One such ML algorithm is TensorFlow, a Python / C library with origins in the Google Brain project. There are other open- and closed-source frameworks available, with some targeted specifically at medical applications.

FDA Framework for AI/ML in Software as a Medical Device

After all, typical submissions are of software and systems that are “locked” and are intended to be used as such, with the assumption that individual devices with the same production configuration will behave in the same manner as the approved device. However, AI/ML SaMD does not necessarily provide the same assurance.

Over time, as the devices are exposed to different data sets and accumulate more training and actual usage, their results can individually “drift” somewhat, leading to different internal conditions and potentially different responses to the same input data.

First let’s look at the categories of modifications the FDA is examining. As defined in the guidelines, these are grouped under:

By including guidelines for the development and release environment and processes, the process seeks to ensure that subsequent releases conform to the original certifications, or that the certifications are revised appropriately, or that an additional review and certification process is triggered prior to release.

The FDA is presenting this as a Total Product Lifecycle (“TPLC”) Regulatory Approach that observes both the pre-market development to post-market performance along with examination of the “organization’s excellence.” (See Figure 1 below.)

So, how is the “organization’s excellence” reviewed and qualified? The FDA outlines a two-fold approach that seeks to:

These approaches work together to determine the level of FDA review required for new modifications. As an example, a change that solely increases performance, is consistent with the SPS, utilizes existing ACP, and did not change intended use or inputs could be made without additional FDA review.

On the other hand, a change to Intended Use would require an FDA review of new SPS and ACP before the change is permitted.

Figure 2 below shows the proposed decision-making process for evaluating new releases of an SaMD.

While in a draft form, the FDA publication regarding the proposed regulatory framework for SaMD’s shows the complexities of dealing with AI and ML-based software and the serious thought the FDA has given thus far to supporting use of AI and ML in medical device software.

For any organizations contemplating use of AI or ML software, being aware of the regulatory framework proposal from the FDA can aid in planning for both successful launch and for on-going update releases of SaMD software.

This article was originally published by The RND Group and is being republished here with permission.

Looking for an all-in-one QMS solution to advance the success of your in-market devices that can integrate your post-market activities with product development efforts? Click here to take a quick tour of Greenlight Guru's Medical Device QMS software →

The RND Group
Twitter LinkedIn Facebook Website
From startup companies to global leaders, and initial designs to product updates, The RND Group can get your Medical Device Software Development project done right the first time. Our clients trust us to work alongside them as collaborative partners. We thrive as problem-solvers, and often partner with companies as the full-service external provider for their Medical Device Software Development. We can also work to supplement your in-house resources. The RND Group employs a unique set of engineers with experience in a variety of technologies. Our company’s focus on designing and building software correctly for complex projects continues to make The RND Group an attractive fit for driven engineers. We’re proud of our ability to build teams across multiple fields, and our aggregated skill sets help give our clients a fantastic experience from start to finish. We specialize in detailed planning, rigorous execution, and we can help you prepare for downstream product iterations. As seasoned experts who have worked on some of the industry’s greatest successes, we always seek to partner with companies on a truly personal level. We take the time to listen and strategize through each step of the Medical Device Software Development process because we know how much this work means to you — and to the healthcare professionals and patients you want to serve.
Back to blog listing page